Do you raid or do arenas with the majority of your free time and don't want to farm for gold hours on end? The idea behind this WoW gold making guide is to earn the most gold possible in the least amount of time. All you need is a level 80 and less than 30 minutes per day. No professions, auction house camping, or farming required. 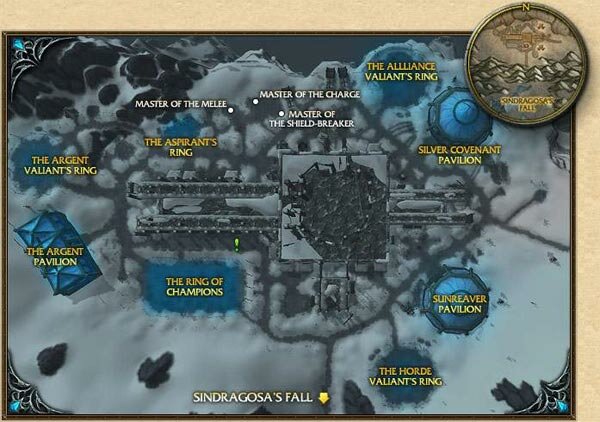 30s
Start at Argent Tournament Grounds in north-east Icecrown and pick up the following quests:
[Among the Champions]
[Threat From Above]
[Battle Before The Citadel]
[Taking Battle To The Enemy]
Note: To get these quests, you must have completed [The Black Knight of Westfall] for the Alliance or [The Black Knight of Silverpine] for the Horde.

Head East to Silver Covenant Pavilion for the Alliance or Sunreaver Pavilion for the Horde and pick up these two quests:
[At The Enemy's Gates]
[A Valiant's Field Training]
[The Grand Melee]
Note: If you've completed the Champion of the Alliance/Horde achievement, you will be unable to get these quests.

5m
Take the flight point west to The Shadow Vault. While flying, ask in general chat for others for help with Threat from Above. At The Shadow Vault, pick up the 3 quests:
[Leave Our Mark]
[Shoot 'Em Up]
[Vile Like Fire!]
Fly south to 44,32 and kill Chillmaw and the 3 Cultist Bombardiers. Don't disband your group just yet.

3.5m
Continue South to 49,71 near Corp'rethar. Use a Stabled Campaign Warhorse and complete Battle Before the Citadel and At The Enemy's Gates with your group. This is will take a few a minute or two longer if done solo.

5m
Fly NW to Jotunheim at (29,40). Kill 15 Vyrkuls and use your Ebon Blade Banners on their corpses. This will complete Taking Battle To The Enemy, A Valiant's Field Training, and Leave Our Mark at the same time!

2m
Use a nearby Njorndar Proto-Drake at (27.5,40). Complete Vile Like Fire! by setting fire to 8 buildings.

2m
Fly North to (32.0,24.7) and use a Jotunheim Rapid-Fire Harpoon. Complete Shoot 'Em Up by shooting down 15 Jotunheim Proto-Drakes. Then fly East to The Shadow Vault and turn in Leave Our Mark, Shoot 'Em Up, and Vile Like Fire! for 39.69g.

2m
Take the flight point to Argent Tournament Grounds and turn in Among the Champions, Threat From Above, Battle Before The Citadel, and Taking Battle To The Enemy for 52.92g, 4 Champion's Purses, and 4 Champion's Seals. Each Champion's Purse contains 10g and about a 5% chance of an extra Seal. Fly East and turn in At The Enemy's Gates, A Valiant's Field Training, and The Grand Melee for 36.96g.
Note: Do not complete the quest [The Valiant's Charge] if it is your last faction required for the Champion of the Alliance/Horde achievement. Otherwise, you will be unable to repeat the three Valiant quests.

12. (Bonus Gold!)
Complete Jack Me Some Lumber at the Argent Tournament Grounds for an extra 13.23g.
Once a week, travel just north of Violet Stand in Crystalsong Forest and get several stacks of Rough Hewn Planks. You can keep chopping down the trees for more Planks even after you've completed the quest. Get 84 Planks for a weeks worth of turn-ins. If you're low on free inventory slots, 3 stacks of Planks will be good for 5 turn-ins.

Complete this Reave.com guide everyday for 7 days and earn 2546g for just over 3 hours of total work.